Some franchisers aren’t just trying to weed out the less desirable buyers. Instead, they are actively recruiting groups they consider good bets.

Consider Maid Brigade Inc., a house-cleaning franchise based in Atlanta that serves 400 regions around the country. When credit got tight, the company decided to zero in on a group that had served them well in the past—armed-forces veterans.

"We had some veterans in the program already, and they were all successful," says Bart Puett, president of Maid Brigade. "They have the right characteristics—they are trained on systems, they are goal setters and are hard working." They also have pensions, which can support them until the business becomes profitable. 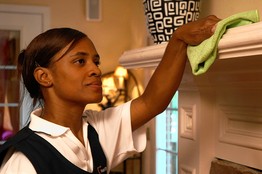 Maid Brigade gave away franchises in a contest for veterans

The company held a contest for veterans and gave away franchises free or at a reduced cost. The winners have been up and running for only a few months, but early metrics are positive, Mr. Puett says. Maid Brigade is now holding its second competition for veterans; it will drop the franchise fees for the first 10 qualified applicants, reducing the overall cost by about $28,000.

Straw Hat Restaurants Inc. has also found success by targeting a demographic. The drive began in 2008, when the pizza chain assembled a new management team. They reduced the requirements and upfront costs for new restaurants, but even the more affordable price wasn’t drawing new qualified owners in the wake of the financial crisis.

That meant Indian candidates were less likely to need a loan. Also, Mr. Fornaci says that Indian populations have close ties to their community and a "strong service-oriented mentality"—two new mandates for incoming franchisees. After advertising franchise opportunities at Bollywood concerts, on Indian TV stations and in Indian journals, Mr. Fornaci started getting as many as 20 leads a day. The chain, which was at 38 restaurants in 2008, is likely to hit 100 by the end of the year. Today, some 65% of the deals closing involve Indian applicants.

Prem Dhoot, who opened a Straw Hat Pizza franchise in Walnut Creek, Calif., in September, is a third-generation Punjabi Indian-American. Mr. Dhoot was able to finance the restaurant primarily with cash from savings. But, he says, "the Indian community—they are willing to help you. If I had overrun costs, I would have been fine."